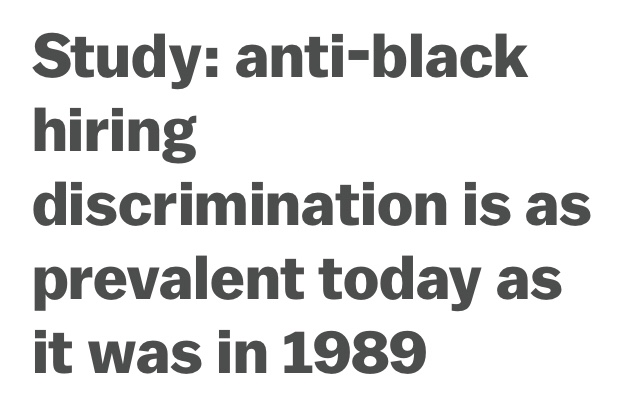 do u ever notice how hard it is 2 get hired for a job. even after multiple calls from many employers, u can not seem to close the deal. why?

do u recognize potential employers & recruiters call based upon ur resume, but upon speaking 2 u, ur suddenly missing a qualification. why?

White Americans are majority racist. They are uncomfortable being around Black American people; for all of their education and so-called intelligence and open minds, they have not quite figured out the protocol to working with Black Americans.

The reason you get so many calls is you have a very American sounding name: Christopher Smith. Your background is even on par with that of White Americans: MBA, CPA, 7 Years work experience. But once they get you on that telephone and you start talking, they quickly notice the speech inflections and/or deep voice; a dead tale you are Black American. I think most have a clandestine edict from the superiors of the company to either hire a Black American or not to. If it’s a green light for a Black American in that particular position for the company, you may get an interview.

Sometimes you’ll notice on the interview the White American person’s discomfort in speaking with you; as much as they try to hide it, it’s saliently in their eyes. I recall in two separate interviews with White American males, each rolled their eyes as if what I was saying to him was completely irrelevant, even though when it was their turn to speak, they each seemed like affable guys whom I could have easily gotten along with as my superior; the interviewers thought otherwise. In one particular interview, the interviewer began riddling off to me regarding things I should say in subsequent interviews with other companies and suggested I could be a CPA on a music tour of recording artist or as a business manager of artist, and he rushed me out of his office before I could finish my closing statement. I never heard back from him since that interview, though I followed up twice with him regarding the position:

I am following up with you regarding our personal interview Oct 24, 2012.

Is there anything you would like to ask me, or would you like to schedule another meeting to talk; as it seems we rushed through our first interview?

What I got from the interview was that you are a great guy that I would be delighted to work under the direction of. As I have already reiterated to you, I know the company brand and would love to be a part of the team at this wonderful growth stage of your corporate life cycle; this seems like the perfect opportunity I am searching for.

What I believe you should have taken away from our meeting is a guy with a great personality to fit into the organization, who is also articulate and knowledgeable in accounting with the skills to take on the challenges of the position.

If there are any concerns you may have, please let us have a conversation in an attempt to quell them.

Thank you for your consideration. I look forward to hearing from you soon.

> I am following up with you regarding our interview for the Corporate Controller position, in reference to where you’re at with your selection process.
>
> I think you will not find a better candidate with his/her CPA, who is familiar with your brand and excited about its growth potential.
>
> Thank you for your consideration. I look forward to hearing from you soon.

Another reason for the apprehension of White Americans hiring Black Americans is often times self-experienced tales of lethargy and lack of details in performing the job. They do not believe regardless of what our degrees may be or how long we’ve been on a previous job or how arduous a state examination we’ve passed, that we will do the job efficiently and thoroughly, and they do not want to take the chance. Even if you look them dead in the eye and say, “I’ve made past mistakes, I’ve learned from those mistakes and I am ready to roll up my sleeves and dedicate myself to the service of learning and performing the challenges of this job” Due to past experience with other Black American hires, THEY DO NOT BELIEVE YOU! Black Americans receive no second chances.

As opposed to divulging how they really feel about us in an effort to come to rapprochement and that we may correct the problems we have, they’d rather ignore it and try to hire around us, etc. In addition to that, in the spirit of nationalism, nepotism and racism, they’d also rather give the salary and position to a White American woman or man. They do not feel you, as a Black American person deserves it, no matter how well you’re dressed, how articulate you are in speaking about your experience, they do not want you past a certain level (this very day it is still noted that Black Americans experience longer search times and receive less pay than both White American men and women). In accounting, that level seems to be Senior Accountant $70K, while the $90K – $120K Accounting Manager and/or Controller/Director of Accounting roles go to a White American or any other ethnicity than Black American who is younger than you.

A Certified Public Accountant  Examination, passing all four parts, is supposed to spell aptitude, attention to detail, work ethic, integrity, dedication and passion to move forward in the profession; for a Black American male like me, employers did not get the memo. But according to Malcolm Gladwell’s “Outliers”, this was the same discrimination process which created all of the great Jewish New York City lawyers born in the years approximate to 1930; in the late 1950s to 1960, prestigious downtown Wall Street law firms would not touch them (Jewish American Lawyers), even told them so to their faces after putting them through a rigorous interview process (illegal today; these days they call you on the phone, listen to nothing but your elocution to determine if you are Black American as they ask you questions for 10 minutes, cordially and properly end the call and never call you ever again, ignore your follow-up e-mails unless you press them, in which case they say, “we’ve moved on with another candidate who’s a better fit); therefore, the Jewish lawyers started their own firms (as I have), took the legal profession squalid work rejected by the top firms, in turn helping greatly to hone skills in particular areas of law such as corporate mergers and acquisitions which later redounded into torrential money rain makers; thus today, the prominent Jewish law firms with 1000 lawyers and the 80 year old Jewish partners.