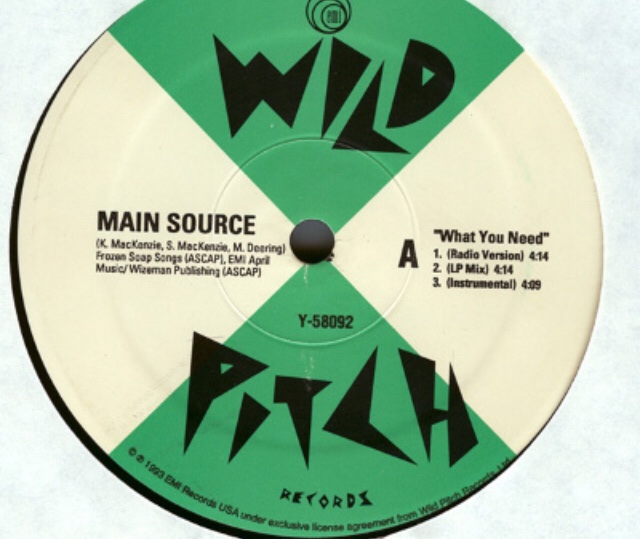 I called Stu Fines Wild Pitch Records office. I would be the first guy from Warren, Ohio to make it in the music industry. He said he got my tape and he wanted to hear something else. He had gotten the first tape with I’m Hype on it. I sent him the new tape with the “Doo Wah Ditty” song I titled “I’m Getting Busier” on it. He called me back saying “I like the music, but not the lyrics.” I was like what, to myself of course. I was thinking “I know my lyrics can’t be worse than MC Hammer’s.”

So after that, about six months later, I made another tape. The feature song was called “I Write The Song.” I used the beginning bass track of the song “Pumpin It Up” by Parliament. This song was another hit, another perfect arrangement. I thought these songs were such hits because no one had used them at all. Sampling was rampant, but no one had touched these songs yet. I also looped another Parliament song, still another perfect arrangement, but not a hit song. The purpose of this song was to tell Stu to “Let Me Be Me,” that I didn’t rhyme like Gangstarr, the only group on his label at the time that I knew of; that I didn’t rhyme like Chuck D or Heavy D. I sent him this tape, and he never responded. I called him a couple of times and wrote a few letters. After about a year and a half later, I made another song using Shabba Ranks and KRSONE Remix to one of Shabba’s songs.

When I was in twelfth grade, I was in love with this white girl named Samantha. She was my girl and I was her guy. We were both in the band, which was how we met. And we were the talk of the whole school, band boosters (parents) and all. We held hands down the hall and gave each other a big french kiss after every meeting between classes. No one wanted us to be together. She was a white girl for real, not the cool white girl who hung out with black girls and had been with black guys before. She was a virgin, hadn’t been with anyone, and didn’t hang out with blacks or try to be black. She didn’t do that after we were not together neither. But you could just feel the tension when we walked down the hall. She even lost her two best friends because she chose to be with me. But she didn’t care. I was the first to dick her down and she loved me no matter what.

I can’t remember exactly when I wrote the song but the structure of it was like this: verse 1 was about Samantha and how no one wanted us loving each other because she was white and I was black. I sent the tape to Stu Fines and got no response, but still wrote him from time to time and tried to call him. I remember when “Main Source” came out, me and my boys were on their nuts. I wrote Stu that this group could be big if he did the right things. “Lookin At The Front Door” was pumpin’ at the time, but it was time for another single. The only other song that really grabbed me that I thought the masses of people would like was “Peace Is Not The Word To Play”. But there was one problem with that, it only had one verse of rhymes and the rest was cuttin’ and scratchin’. I told Stu in a letter that if Large Professor put two more verses on that song, it would be dope. What do you know, about two or three months later, I see the video for the song with the extra verses, but it was wack the way they arranged it, not at all what I had in mind.

I was a freshman in college. I had completed my first year of school, pledged A Phi A and I was enjoying my summer. I was working at Bank One as part of my scholarship intern program. I was ready to record another tape. I had the beats looped and ready to go. I went to my cousin and he said he needed a part to record and he didn’t have it, but I think he was just bullshittin’ me. So I couldn’t record anymore. So my dream had kind of started dying from there. I still wrote songs here and there, but I had no studio to go to and no beats because that looping shit I was doing was old to me and I needed fresh, real beats that I had no access to.

At the end of the summer, I was off from the bank, just got paid, and I had like $300 with nothing to do with it. It was a Thursday night, and I was sitting home, and I just made up my mind that “in the morning, I’m driving to New York.” From Warren, Ohio, I could take 80 East all the way there. My car didn’t look like it was in the best of shape but it could move on the high way, and I hadn’t had any problems out of it. It was a 1980 Buick Skylark that was busted up where the windshield meets the roof because I had hit a deer that tried to jump over the car to avoid being hit when it ran out into the street. I didn’t tell anyone I was driving to NY because I didn’t want to hear anyone’s mouth about the car not being able to make it. I got up that Friday morning and started driving. It took me about six hours to get there. I initially passed New York up and drove into Connecticut because I was looking for a sign that said “New York City, This Way.” There was no such sign and there still is no such sign. Once in Connecticut, I stopped at a gas station and asked where was New York City, and the attendant said, “back that way.” I went back and when I seen signs that said “Mount Vernon” I turned off. I was driving around looking for a mall or something. I stopped in a sports store, and to my amazement, they had Champion Sweatshirtsin every color imaginable. Champion sweatshirts were the shit at that time.