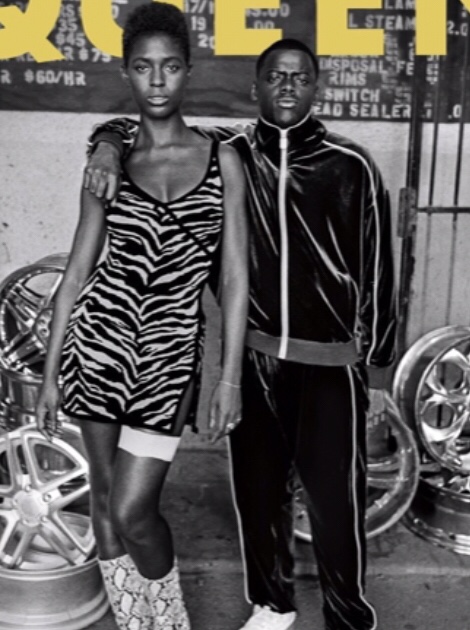 “This is directed to whoever in listening range / A yo the whole state of thangs in this world bout to change” (Black Thought of The Roots “The Next Movement” Things Fall Apart album, 1999). I say that to say Lena Waithe (screenplay writer of Queen and Slim) has an uncanny ability of bringing across significant, real, Black cultural expression unmatched by nearly all who have come before her.
Enter: QUEEN AND SLIM
When I go to a movie, I do not like to research what it will be about. When I saw posters pop up in and around Los Angeles for the film Queen and Slim, my first thought was that it was about a drug dealer in the 80s and his girl. As you may have heard my vociferous harangues on “NO MORE JIM CROW: movies, plays, books, television series”; the ad poster alone is the antipode of Jim Crow, so I was all aboard and ready to go see 10:30 PM Thanksgiving night.
You have a beautiful young lawyer with anxiety issues played by Jodie Turner-Smith. You have a beautiful, caring young black male played by Daniel Kaluuya, who loves his family; particularly his father (in a world where Black men aren’t normally depicted as having a proclivity toward family, NOR HAVING FATHERS!).
Queen and Slim are out on a Tinder date because she was bored and liked his lonely lorn looking photo and “I felt sorry for you”, she tells him at dinner.
After the dinner on the ride home to drop her off is where things get FASTIDIOUS! A bond starts to form, well, for no other reason than, it has to! And from the forming of this bond on this in-fortuitous journey, is where the beauty of the film starts to unfold.
What began to unfold was, literally a modern age story of Harriet Tubman and The Underground Railroad in the opposite direction, South.
In the unfolding of this journey, I found myself being shot in the heart with moments of love and artistic expression.
When Queen and Slim arrive at her uncle Earl’s (Bokeem Woodbine) house in New Orleans, a weird (maybe not so weird within the Black Community) back-end family love support connection happens.
As Queen and Slim are forced to leave her Uncle’s house, just before they hop into their new set of wheels begrudgingly bequeathed to them by her uncle, two modern art paintings (if I was an artist I’d paint them) unfold. 1. The young lady dressed in a tight mini-skirt and rubber rain boots, bending down as Queen’s uncle bids his niece an “I love you” and goodbye outside the car window; the picture of the car, him at the window and the young lady in the mini-skirt bent down, was an aesthetic I found endearing. 2. As the car pulls off, the young lady in the mini skirt rises from her knelt position; she and Queen’s uncle, with their backs turned to the camera, watch it ride off into the sunshine; on cue, Roy Ayers “Sunshine” starts to play as scene music.
Queen and Slim continuing on their journey, the audience starts to learn, are becoming immortalized and heroic and supported by the Black community on their road to freedom.
On a stop at a live music bar, a second date of sorts to the first Tinder date; as Slim goes to order a drink, an older female bar tender flirts with him a little. When he goes to pay for the drinks, a beautiful, almost tear jerking, exchange of community love and support happens.
At the end of the film, the last shot of Bokeem Woodbine, we’ve all (especially men) had that expression on our face at that very moment.
Three problems I had with the film: 1. The dereliction of duty by a Black police officer in the film could have astounding real life effects on the hiring of Black police officers throughout the nation. 2. The actions of the young man from the auto repair shop could continue to fuel police shootings and killings of young Black males in America. 3. THE ENDING; though realistic and highly likely, and emotionally charged, I would have liked to see a different less protracted ending to Queen and Slim’s Journey.
Even with those three complaints; ALL STARS, ALL-GREEN TOMATOES, ALL BLACK EVERYTHING, ACCOLADES FOR THIS FILM: QUEEN AND SLIM!

Regina Hill’s character “Jordan” was bullied as a child and has become a sociopathic overbearing boss of her own firm “PSI”. Jordan is deafly horrible to all of her employees, but particularly to her amenable   assistant “April’, played by Issa Rae. Jordan: “ how are you supposed to take my calls when you’re sleeping?” April: “well I never know when you’re going to call so when am I supposed to sleep?” Jordan: “WHEN I’M NOT CALLIING!”

As a result of Jordan’s behavior which is an albatross to the entire organization, her firm is on the verge of losing its top grossing client; as a fall-out of that bad news, Jordan debases April in front of a little girl who calls her out on her bad behavior and mean-ness. In the ensuing melee, the little girl, who performs bad magic tricks, waves her magic wand and wishes Jordan to be “Little”; Jordan in turn, wakes up the next day as little Jordan, played by Marsai Martin.

The remainder is a conglomeration of some very funny and some very cheesy moments as epiphanies are revealed to little Jordan regarding the errors in her ways of being as an adult.

Regina Hill plays the despot CEO with perfect comedic timing. Who knew she was a comedian; proof her current growing resume in Hollywood, rising as a top actress participating in many great projects, with many more to come, is well deserved. To add comedy, with such a great performance, to her resume is quite a feat for a black actress who did not get her start as a stand-up comedian.

Her role as Jordan only goes to speak further to Hollywood, that only a slither of opportunity is needed and that any (no matter race or gender) performer, with hard work and dedication, can make a role come alive with great affect. What that means is that, with a movie such as “Little”, this movie 20 years ago, could simply have been played by and executive produced by an all-white cast and crew; flip the script, 20 years later, and the movie comes off well with majority black actors/actresses and executive producers (14 Yr Old Marsai Martin being one of the executive producers).

Issa Rae brings the full-on comedy to the film. Her thirsty, desperate, quirky, unsure, “INSECURE” (also the title to her hit HBO show) character is the best, is the worst, is everything. The way she reacts to any good looking male character in the film is comedic gold: “he can get it”, “you can get it”, “I’m available”, “Oh, you’re divorced, aaaaww, I’m so happy!” Her denouements to introductions of the handsome male characters in the film brought about high pitched laughter all throughout the film.

Marsai Martin played the role of Little Jordan, a precocious teen, who’s actually an adult, very well. When she had to return back to school and met her teacher, the tall and handsome, Justin Hartley; her expression of infatuation and sexual desire was something unimaginable. I had to ask myself, how was she able to give such an accurate portrayal of someone smitten by cupid; yet, having never been smitten in real life or at best, a yearling in the subject of love, at such a young age?

The three main characters: Marsai Martin “Little Jordan”, Issa Rae “April” and Regina Hill “Big Jordan” all brought their A-game to the performance of their roles and made a good film, as their top billing suggest they should have.

Will Packer Productions has tapped a market that is at the penultimate of fatigue with what, seemed in the early 2000s to be an indefatigable monopoly on black comedy, by Tyler Perry and his Madea character. But I admonish Will Packer Productions to take a second look at some of the moments in the films, such as the moment in Girls Trip at the very end, where the guy runs out of the hotel room naked with his penis burning from the fruit juice. And with Luke James character in this film, “Little”, he could have been a bit more grounded, and/or his surprise dance routine could have been better/shot/choreographed/performed. And some of the jokes did not land, as with every comedy, all of the jokes are not going to land with everyone. Be more cognizant of editing out cheezy parts and jokes that seem to be “one too many” of a joke, that the film could do without.

I celebrate the film; would definitely purchase the DVD as an entertaining re-watch at my convenience. Regina Hill’s performance was unexpected, funny, well performed. Congrats to her as her career continues to open up.